Amber Fort is located in Amer, Rajasthan; is now commonly known as Amer Fort. Amer is a small town, situated on a hill and is 11 km away from Jaipur which is the capital of Rajasthan. The town was first established by the Meenas but later ruled by Raja Man Singh.

Raja Man Singh I (1550–1614) is the same king who was the trusted army general of the Mughal King Akbar. He was one among the navratnas of King Akbar.

Amer Fort is famous for its artistically designed architectural elements. The fort has cobbled paths with large embankments and countless gates and Maota Lake right beside it, which is the sole water source for Amer Palace. 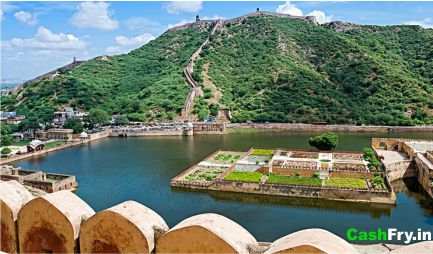 Locals believe Amber or Amer name was taken from the Shiv Temple named Ambikeshwar, at the Cheel ka Teela hill and few locals believe it is after the Goddess Durga, Amba. 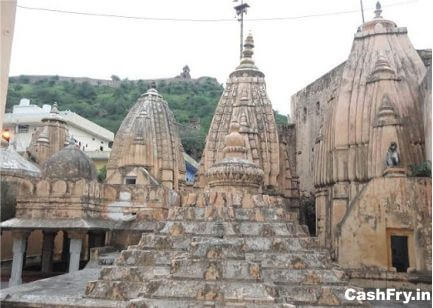 How to reach Amer Fort

Amer Fort is about 259 KM from Delhi. You can go by Car, Bus, Train or a Plain. There is a flight from Delhi to Jaipur. There are Jet Airways, SpiceJet, IndiGo, and Air India flights. Ypu can book your flight at Discounted Price through MakeMyTrip Domestic Flight Coupons.

The fort is located on a hill covered with forest, which juts into Maota Lake. It is near the National Highway 11C towards Delhi. A narrow road leads to the gigantic entrance gate of the fort which is known as Suraj Pol. Tourists are suggested to travel in jeeps to reach the fort.

Raja Alan Singh, one of the rulers of the Chanda Clan from the Meenas began the foundation of Amer in 967 CE.

The Amber Fort is built on the ruins of another building, which was a part of Raja Man Singh- The Kachwala King’s empire. The fort was later built entirely by Jai Singh I (1611–1667) , Raja Man Singh’s heir.

After almost 150 years, the Amer fort was renovated. This stopped once the Kachwahas during the era of Sawai Jai Singh II (1688–1743) moved their capital to Jaipur in 1727.

Jaigarh Fort of Rajasthan was the first Rajput building built by Raja Kakil Dev when he chose Amber as his Capital in 1036. However, most of the buildings in Amber were established & expanded during the 1600s when Raja Man Singh was the ruler. One of the main buildings is the ‘Diwan’-i-Khas’ in Amber palace & the Ganesh Poll which was painted by Mirza Raja Jai Singh I with many interesting/beautiful intricate details. 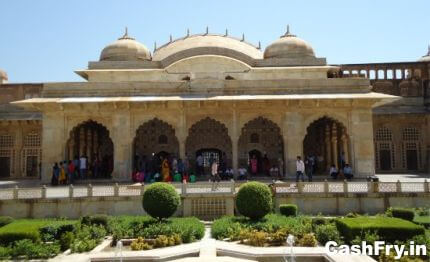 The structure which is known as Amer Palace today was built in the late 16th century as an extension to the existing dwelling of the rulers. The older palace – Kadaimi Mahal which is situated in the valley behind Amer palace, is believed to be the oldest palace in India.

In the medieval period, since reigning of the Kachwahas the Amer was called as Dhundar and the capital was shifted to Jaipur. The history of Amber fort is ingrained to the rulers of Amber who founded and established their empires at Amer.

Amer Palace consists of six main but separate sections where each section has their own gate and courtyard. The main entrance is through the Suraj Pol which leads to the very first main courtyard. This gate was guarded securely by guards as this gate used by the royal dignitaries and was named Suraj gate as the gate faced towards the east to the sunrise. 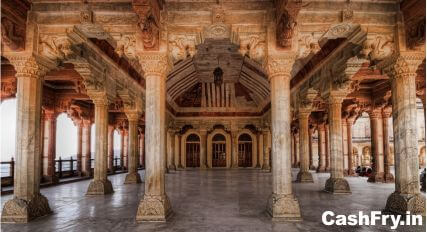 The Third Courtyard is through the Ganesh Pol leading to the personal quarters of the king. The Fourth Courtyard is where the royal family’s women used to live and the palace of Man Singh I which is towards the south of it is the main palace.

You can read about Chittorgarh Fort History in this blog.