Gwalior Fort is situated on a hill in Gwalior, Madhya Pradesh. The exact era of the Gwalior fort’s construction could not be determined, but according to local legends, the fort was built around the 6th century by Suraj Sen, a local king in 3 AD.

A saint named Gwalipa cured the king’s leprosy by offering him water from a sacred pond which is still a part of the fort. The king was grateful to the sage hence he built a fort and named it after him. The fort was ruled over by 83 descendants of Suraj Sen Pal until the 84th king Tej Karan lost it. Tej Karan lost it because he did not include ‘Sen Pal’ in his name.

Through the centuries the fort has been passed on to many hands – The Hunas, Mihira Bhoja, the Kachchhapaghatas, the Muslims, Maan Singh Tomar, Sikander Lodi, the Mughals, Sher Shah Suri, Akbar, the Ranas chieftains of Gohad and Mahadaji Shinde until the British East India Company took over. They handed over the fort in 1886 to the Scindia family, who continued to rule Gwalior until the independence.

How to Reach Gwalior:

Gwalior is about 366 KM from Delhi. You can go to Gwalior by train or flight.  There are a very few numbers of flights available.  You have to book in advance.  You can book your train ticket.

Alternatively, you can book your flight at low prices with MakeMyTrip Flight Coupons.

They also constructed several monuments in the fort including the Jai Vilas Mahal but now the fort has two main palaces – Gujari Mahal and Man Mandir which were built by Man Singh Tomar.

The fort was built on a rock formation of Vindhyan sandstone on a rocky hill- Gopachal. Swarnrekha, a small river flows close to the fort. It is stretched in an area of 3 square kilometers and is almost 35 feet high. It has a rampart which is built around the edge of the hill and is joined by six towers.

The fort has two gates – Hathi Pul, on the northeast side, and Badalgarh on the southwest.

Siddhachal Jain Temple Caves – Inside the Gwalior fort there are 11 Jain temples in north and on the southern side there are 21 temples carved into the rocks of the Tirthankaras.

Teli ka Mandir – Mihira Bhoja, a Pratihara emperor built the Teli ka Mandir. It’s one of the oldest parts of the fort and its architectural style is a blend of north and south India. 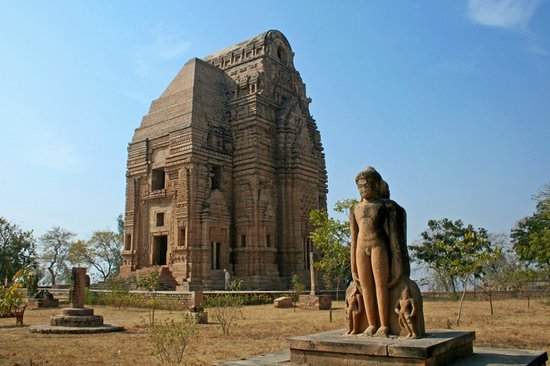 There is a beautiful structure near Teli Ka Mandir:

Sahastrabahu Temple – It was built in 1093 by the Kachchhapaghata dynasty. It has pyramidal shape and has several stories built on red sandstone in the beams and pillars.

Gurdwara Data Bandi Chhor – This was built after Sri Guru Hargobind Sahib Ji, who was held captive at the fort for helping fifty-two imprisoned kings to escape. Hence, the word ‘Bandi’ refers to ‘imprisoned’ and ‘Chhor’ refers to ‘release’.

Gujari Mahal – Maharaja Man Singh built this palace in the 15th century for his beloved queen Mrignayani. The palace is now being used as an archaeological museum. It contains rare artifacts, Hindu and Jain scriptures and sculptures and many more such items left behind by the rulers.

Karan Mahal – It was made by Kirti Singh, also known as Karan Singh, therefore, the palace was named after him.

Vikram Mahal – It was originally Vikram mandir (Shiv Temple) and it was built by the elder son of Maharaja Mansingh, Vikramaditya Singh.

There are many more interesting sculptures, monuments, and temples with intricate designs and details in the fort. If you love the historic Indian architecture, Gwalior Fort is the place for you.