Jaisalmer Fort is in the city of Jaisalmer, Rajasthan and is also one of the oldest forts in the state. Almost one-fourth of the old city’s population still lives inside the fort. It is known to be the only “living forts” in the world. For the most part of the history, the whole city of Jaisalmer was in the fort. The very first settlements were made in the 17th century to shelter the growing communities of Jaisalmer.

It was established by Rajput ruler- Jaisal in 1156 CE and hence derives its name from him. It’s gigantic yellow sandstone walls look tawny lion color in the day time and becomes honey-gold during sunsets, camouflages the fort with the desert. Because of this, it is also called the ‘Sonar Quila’ or ‘Golden Fort’. It was declared as a UNESCO World Heritage Site along with five other hill forts of Rajasthan. 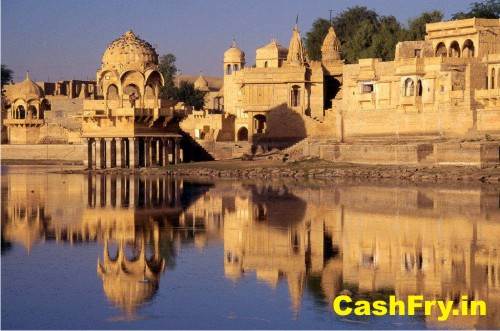 How to reach Jaisalmer

From Delhi, It is about 825 KM. You can go to Jaisalmer by train.  There are plenty of trains. You can book your Train Ticket at MakeMyTrip.  Alternatively, there are flights up to Jodhpur. From Jodhpur, one can go by Taxi. It takes about 4 hours. Flights can be booked through Make My Trip at a discounted price by using MakeMyTrip Flight Coupon Code.

According to the legends, the fort was constructed by a Bhati ruler – Rawal Jaisal. Near 1293-94, Rawal Jethsi suffered a siege for 8-9 years by Sultan Alauddin Khilji of Delhi as revenge. After facing defeat, the male warriors died in the battle and the women committed Jauhar. The fort remained abandoned for a few years and eventually got reoccupied by some Bhatis.

Around 1530–1551 during Rawal Lunakaran’s reign the fort was attacked by Amir Ali. When it seemed that they are fighting a losing battle, the women of their community were slaughtered by him as there wasn’t enough time to conduct a Jauhar. Fortunately, help arrived right after that and the army of Jaisalmer successfully defended the fort.

It is said that Humayun also attacked the fort. Rawal Lunakaran fought with him. Later there was some talk about the marriage of his daughter to Akbar. Hence, the Mughals ruled the fort till 1762. It was under the Mughals until 1762 when Maharawal Mulraj took over. From 1818, Mulraj controlled the fort and protected it from invasion. This was the result of the treaty between him and the East India Company. After his death in 1820, his grandson Gaj Singh got control of the fort.

The British rule led to an emergence of trade and later growth of the port of Bombay resulted in the gradual economic decline of the city. After independence, the ancient trade route was closed and it did not hold up as a military post, Jaisalmer is still able to earn revenues through tourism. 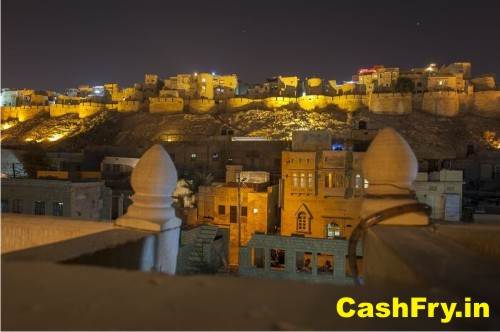 The fort is 1,500 ft in length and 750 ft in width. It stands on the Trikuta Hill which from the ground that extends across the great Thar Desert in the southern part of the city. The base has a 15 ft tall outermost wall within its triple ringed architecture. The upper bastions form a defensive inner which is 4 km long.

Places to Visit in Jaisalmer

Do visit the main attraction of Jaisalmer city when you visit it!