Kangra Fort is one the most famous attractions of Kangra District in the heart of Himachal Pradesh.  It is situated in the outskirts, which is around 20 km away from the Dharamshala. The fort covers an area of about 463 acres, has high walls and ramparts as the border.

It is at the top of a steep hill called the Purana Kangra with two rivers flowing near it, Banganga and Patal Ganga. Several doors were made in the fort by several dynasties. 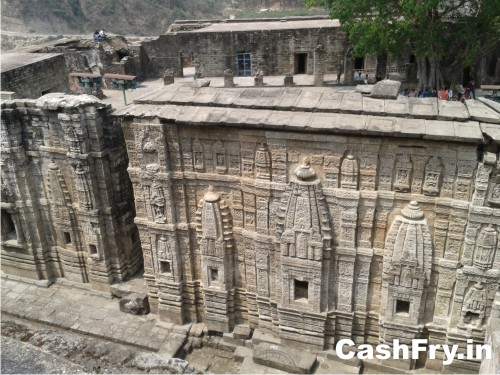 How to reach Kangra

The fort was built around the 4th century BC by the Rajputs of Katoch Dynasty. It is known to be one of the oldest and the largest fort in the Himalayas.

It is believed that this grand fort was built by Maharaja Susharma Chandra of Katoch dynasty. You might know that Susharma Chandra fought for Kauravas, in Mahabharata battle. When the Kauravas lost the battle, he came to Kangra along with his soldiers instead of going back to his capital in Multan. This area of Kangra was called by the name Trigarta at the time of Mahabharata because of three rivers: Sutlej, Beas, and Ravi. He took this area under his control and built the Kangra fort to protect his kingdom.

“Many Historians claim that the Kangra fort has got 21 treasure wells. The depth of wells is about 4 meters and the circumference of the wells is about 2 and a half meters. It is said that Sultan of Ghazni looted eight wells. The British found another five wells in the year 1890 to 95. Local people believe that there are eight more hidden treasure wells in the fort”.

The fort and the temples there had a lot of Gold, Silver and Precious Stones. Therefore, it was an attraction for the various kings. There was a saying whosoever holds the Kangra Fort, holds the hills of Himalayas.

It was controlled and ruled over by different rulers. Mahmud Ghazni(1009), Firuz Shah Tughluq (1360) and Sher Shah (1540) were the most prominent rulers of the fort.

Akbar could not seize the fort. Later his son Jahangir (Salim) with the help of his Punjab Governor Murtaza Khan tried to take the fort under control but he failed. That time Kangra Fort was under control of Raja Hari Chand II. Jahangir failed even after taking help of Rajput Suraj Mal. Suraj Mal was the cousin of Jodha Bai, mother of Jahangir

Later the Prince Khurram, son of Jahangir, was in charge of it for weeks and the siege lasted for 14 months. The supplies to the fort were cut off and the troops of Rajputs survived on boiled dry grass. After uncountable deaths and starvation, they surrendered by the end of 1620. Then in 1621, Jahangir visited and built a mosque inside Kangra fort.

The Katoch attacked Mughals repeatedly trying to weaken them, which eventually aided to the decline of the Mughals. In 1789, Raja Sansar Chand II reconquered his ancestral fort.

Later Maharaja Sansar Chand (1765-1823) went through several battles with Gurkhas and Sikh King Maharaja Ranjit Singh. He used to imprison his neighboring Kings and this resulted in conspiracies against him.

During the Kangada battle, the gates of the fort had been kept open for supplies between the Sikhs and Katochs. In 1806, the Gorkhali army entered the scarcely armed gates which led to an alliance of Maharaja Sansar Chand and Maharaja Ranjit Singh.

Gurkha General Amar Singh Thapa surrounded the Kangra Fort with his army for quite some time. Sansar Chand lost patience and asked  Maharaja Ranjit Singh for help. In return, Ranjit Singh asked for the possession of the fort.  Sansar Chand agreed to this.

After a never-ending Gurkhas-Sikh War, the Gurkhas gave up and abandoned the fort. After the death of Sansar Chand, the Katochs ruled over the fort until 1828 and then Ranjit Singh took over.

In 1846 after the Sikh war, the fort was taken over by the British and they ruled over the fort till April 4, 1905 when the fort suffered a massive earthquake.

The fort entrance is through a gate named Ranjit Singh which was designed with stone carvings. From there a long narrow passage goes through the Jahangiri Darwaza and then Ahni and Amiri Darwazas leading to the top of the fort. The Darshani Darwaza leads to defaced statues of River Goddesses Ganga and Yamuna.

There are three main temples in the fort- Ambika Devi Temple, the Shitlamata Temple, and Lakshmi Narayan Temple. There is another temple dedicated to Jain Tirthankaras with a stone image of Lord Adinath. The staircase between Ambika Devi temple and Shitlamata temple leads to the Sheesh Mahal. The Mahal has a small hall-like compartment which is designed with a block of stone with a polygonal watch towards the edge. The ruins of a historical mosque can be found inside the Andheri Darwaza. Another significant attraction of the fort is a stepwell called Kapoor Sagar.

Make sure you visit Kangra Fort when you’re in Himachal to experience the beauty and architecture of one of the most prominent historical monuments of ancient India.