What’s the first thing that comes to your mind when you think of ‘Hyderabad’?  City of Pearls, Nizamo ka Shaher, Biryani, Nagarjuna and the list goes on and on.

Hyderabad has grown into a cosmopolitan city. In its most recent phase of growth, the IT boom galvanised Hyderabad’s outskirts into a major international hub. Many people from other parts of India and abroad, attracted by Hyderabad’s resources, climate and peaceful environment, have made its home.

Hyderabad is the common capital of Andhra Pradesh and Telangana. The word ‘Hyderabad’ comes from the Arabic word ‘hyder’ which means ‘lion’ (no doubt the Hyderabadis feel like one! 😀 ). Hyderabad is situated in the newly formed state – Telangana, which is in the southern part of India. The twin city of Hyderabad is Secunderabad. Secunderabad is the modern administrative city which was founded by the British in 1806. Hyderabad basically has two areas old city and the ‘HITEC’ city.

You can check out the following video for various tourist places.

So, if you ever go to Hyderabad, make sure you visit all the places mentioned below.  Get Cheap tickets and Hotels with MakeMyTrip Domestic Flight Offers. 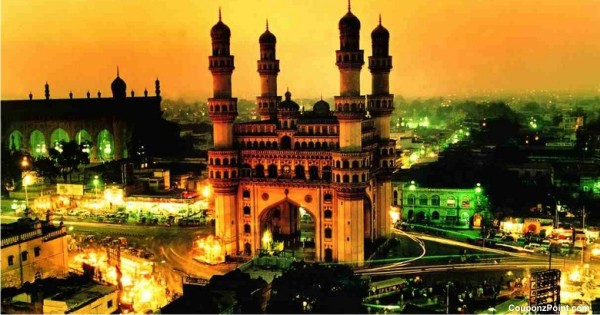 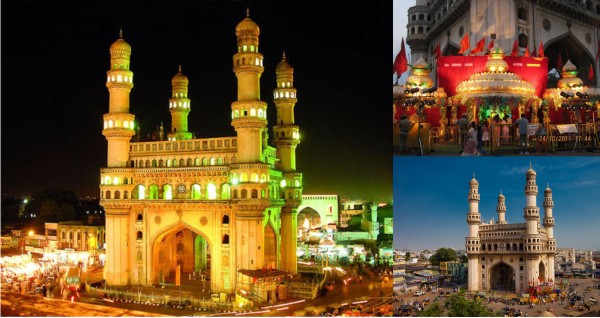 The four minarets – Charminar got its name because of its structure. It is the signature of the city. Charminar is the main crossroad in the old city. It is a Qutub Shahi architecture, built in 1591. This charming monument is also known as ‘The Arc de Triomphe of the East’. Quli Qutub Shah constructed a new city, with Charminar at the center and four roads going in different directions. Charminar is also known for street shopping, as Laad Bazaar or Choodee Bazaar (Bangles Market). Another landmark – Makkah Masjid is just opposite to Charminar. Not too far away, there’s a restaurant Shadab, which is famous for its burpilicious biryani.

Fun Fact: There’s a Hindu Temple (Bhagyalakshmi Temple) in Charminar!
Timings: 10.30AM to 5.30PM.
Distance: From Secunderabad Railway Station to Charminar is 10.1 km and from Rajiv Gandhi Airport to Charminar is 20.8 km. 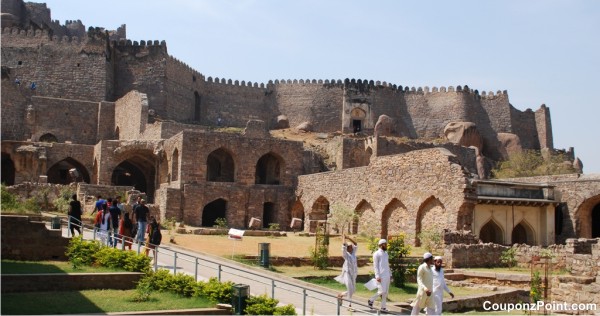 This fort is also known as Golconda, Gol Konda which means ‘Round shaped hill’ in Hindi and Golla Konda in Telugu means ‘Shepherd’s Hill’.

Golkonda is situated in the west side of Hyderabad. The fort was built by the Kakatiyas in the 13th Century. Also, it was the capital of Qutb Shahi dynasty. Golkonda is also known for the mines that have given the world famous gems and diamonds, including “Koh-i-Noor”. The fort is built with mud on a hill, which is 400 feet high. It has four distinct forts. The outer wall is 10 km long which has 87 bastions, eight gateways, temples, mosques, several royal apartments, and halls, etc.

The Golkonda fort is full of architectural marvels. A clap near the entrance at a fixed position can be heard at the highest point almost a kilometer away which is ‘Bala Hissar’ pavilion. This was used to warn everyone that there were intruders or even guests. At Fateh Darwaza, you can experience a fantastic acoustic sound effect. This the characteristic of the engineering of marvels at Golkonda from the olden days. A hand clap at the entrance reverberates. You can hear it clearly at the ‘Bala Hisar’ pavilion, which is the highest point about a kilometer away. This was the warning note to the royal kings in case of an attack.

Fun Fact: There is a secret tunnel from Golkonda to Charminar, which was used by the king and soldiers to escape during battles! Also, every night there is an amazing sound & light show arranged in Golkonda.
Timings: 9AM–5:30PM ; Sound & Light Show- 8PM–12:05AM
Distance: From Secunderabad Railway Station to Golkonda is 14.7 km and from Rajiv Gandhi Airport to Golkonda- 28.1 km 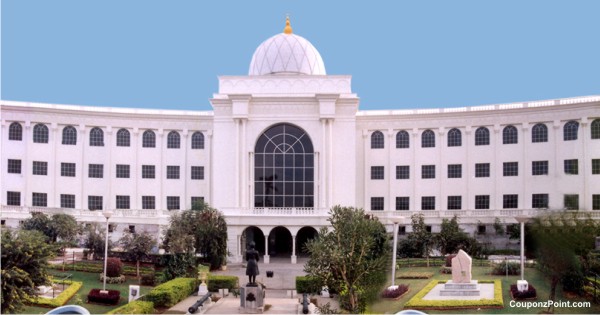 Salar Jung Museum is one of the few National Museums in India and it is one of the largest in the world. This museum belonged to Salar Jung Family, it is the largest one-man collection of antiques. It has a wide range of paintings, sculptures, carvings, ceramics, costumes, jewelry, textiles, and furniture from China, Persia, Egypt, Europe, Burma & North America.

Salar Jung has a lot of things belonging to Indian history. Such as paintings of Raja Ravi Varma, Aurangzeb’s sword, Jade crafted daggers used by Emperor Jehangir, Noorjahan, and Shah Jahan, the wardrobe of Tipu Sultan, etc. There are many mesmerizing sculptures like the Veiled Rebecca and Mephistopheles and Margaretta also known as the Double Statue.

Fun Fact: Nawab Mir Yusuf Ali Khan Salar Jung III (1889–1949) was the former Prime Minister of the seventh Nizam of Hyderabad. He spent a substantial amount of his fortune for over thirty-five years to make this astonishing collection, it was his passion! How cool is that?

Distance: From Secunderabad Railways Station is 11.1 km and from Rajiv Gandhi Airport is 24.8 km 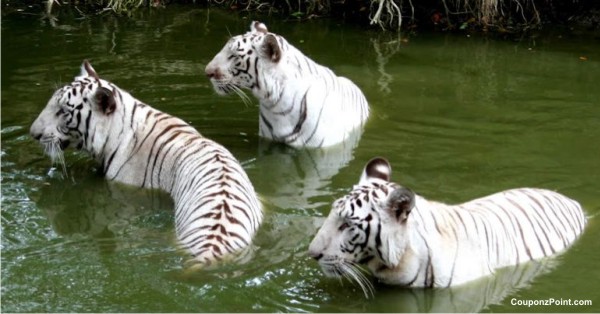 Nehru Zoological Park or The Hyderabad Zoo is one of the largest zoos in India. It was opened in 1963. Located in the south of the city, it occupies over 380 acres of land adjacent to Mir Alam Tank(reservoir).

Hyderabad Zoo has a 53 species of Mammals, 75 species of Birds and 24 species of Reptiles. You can even see Aquarium, Nocturnal Animals, Snakes, butterflies and tortoise house. There are Tigers and Lions Safaris. It’s not possible for people to cover the zoo in one day on foot, hence the zoo has introduced facilities like a toy train, golf carts, and bicycles. It even has a park for children, a great place to spend a day with the whole family!

Fun Fact: There are two tortoises who were there from the start. Now they are 117 years old and weigh more than 100kgs each!

Distance: From Secunderabad Railways Station is 12.6 km and from Rajiv Gandhi Airport is 20.8 km 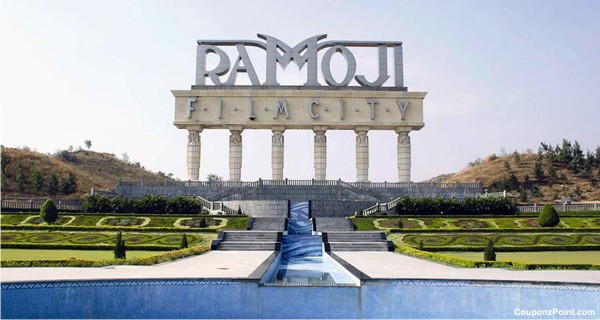 Located in the south-west of Hyderabad, Ramoji Film City is the World’s Largest film city. Ramoji Rao is the founder and owner of this film city.

One cannot cover the whole area in a day, so there are buses which will take you from one part of the city to another. Except for the rides, games, and food, everything is included in the ticket. There are many restaurants and two hotels for visitors.

Fun Fact: Ramoji Film City holds the Guinness World Records as it is the largest film studio in the world occupying 2000 acres.

Distance: From Secunderabad Railways Station is 27.4 km from Rajiv Gandhi Airport is 39.5km 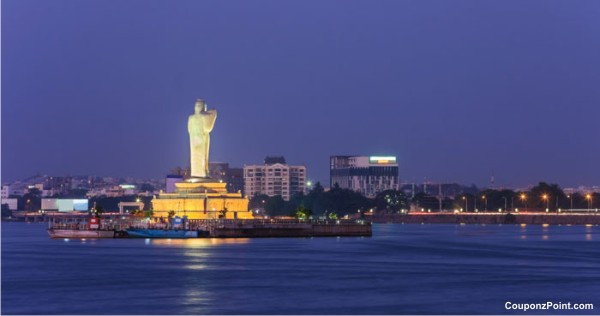 Hussain Sagar is a heart-shaped lake in between the twin cities – Hyderabad and Secundrabad. It was built by Ibrahim Quli Qutub Shah during his rule in 1563. The water in this lake comes from tunnels which are connected to River Musi. It occupies 5.7sq km. It was built by the king to provide water to his people.

The statue of Gautam Buddha was established in the middle of the lake in the year 1932, this is also a famous Tourist Spot. The Lumbini Park, which is at the bank of the lake. This park provides cruises and speed boats which will take you to the statue of Buddha. There are more amazing tourist spots and visiting places near the banks of the lake. NTR Gardens, Eat Street, Prasads IMAX, Snow World, Jalvihar and Cycling Joint are few of them. If you love Dogs, there is a Dog Meet every Sunday, where all the dog owners get their dogs beside Jalvihar!

Fun Fact: On the World Tourism Day, UNWTO declared Hussain Sagar as the Largest Heart-Shaped Mark on the World Map. People in Hyderabad the road surrounding Hussain Sagar, looks like a Necklace and hence the name given to it is ‘Necklace Road’!

Distance: From Secunderabad Railways Station is 7.8 km and from Rajiv Gandhi Airport is 32.9 km.

Hyderabad is a good place to live as well. The rents and the property is cheaper in comparison to North India.

If you have not visited the capital of India, you must check out the Best Places to Visit in Delhi. 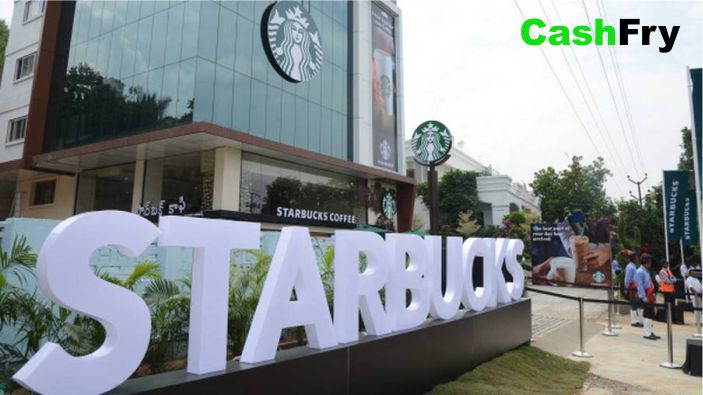